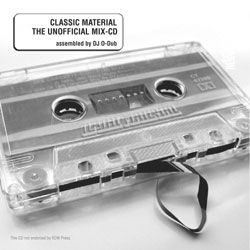 
This mix-CD was inspired by CLASSIC MATERIAL: THE HIP-HOP ALBUM GUIDE, a book I edited that reviews over 70 of hip-hop's most important and influential albums. For the mix, I reviewed the list of albums and selected over 30 songs, almost all of them tracks found only on the LPs.

I had actually been thinking about making a mix-CD like this prior to the connection to the book...an Incognitos volume that highlights LP cuts that many may have overlooked given hip-hop's preference for 12" singles. If you're like me, your favorite hip-hop albums hit you with all sorts of songs that were just as good (if not better) than the singles, meaning that every LP was full of potential surprises. Since the book looks at albums, it just made sense to put some of these ideas into motion and I combed through dozens of songs to pick out a selection of tracks you might have otherwise forgotten if you haven't blown the dust off your LP and cassette collections recently.

While the mix wasn't originally intended to be in semi-chronological order, it actually ended up making sense for purely practical reasons. For one thing, after the early '90s, very few artists put our upper tempo cuts, making mixing something like...the Jungle Brothers circa '90 tricky against, say, mid-90s Jay-Z. Besides, I liked trying to link likeminded songs with each other and creating some attempt at continuity.

The Intro was a fun romp through rap's lyrical past (shout out to the Online Hip-Hop Lyrics Archive) with a nod to the enduring legacy not just Spoonie Gee's "Spoonin Rap" but specifically Grandmaster Flash's "Adventures on the Wheels of Steel" whose intro I adapt for here.

No matter how many times you watch it, the Basketball Battle scene, between the Fantastic 5 and Cold Crush Brothers, from Wildstyle never gets old. Remember when battles meant two squads going at it in verse or on the blacktop and not with knives and guns? Boy, do I feel middle-aged... The Treacherous Three, speak their "New Rap Language" - one of the many classic jams to appear on New York's Enjoy imprint. While these were always singles, you can find many of the best Enjoy titles on the aptly entitled, Best of Enjoy compilation. Cop it!

Even back in the '80s, Kool Keith of the Ultramagnetic MCs was on some other sh--. His verses on "Break North" (from the Critical Beatdown album) are off-the-wall like photos of your ex. Bugged yet rugged. Just as rugged, or maybe just plain R A W, Big Daddy Kane's "Long Live the Kane" (from the LP of the same name) kicks that ol' fast rap heat with the quickness. Damn, he was the man.

The Jungle Brothers: Feelin' Alright, a personal favorite from Done by the Forces of Nature slides in after, followed by NWA's "Quiet On the Set", one of the dope cuts that MC Ren appears on but never really gets noticed because Ice Cube was always the bigger presence. There's no ignoring MC Lyte either as she brags that she's "Lyte As a Rock" (from the album of the same name). She was always such a firecracker - the wrong MC to mess with as some (Antoinette anyone?) found out the hard way.

The Beastie Boys have fools running for cover from the terror of "The Egg Man", one of the many winners from Paul's Boutique, an album that I slept on for years because I was too caught in wanting Licensed to Ill Pt 2. How come other folks don't flip that "Pusherman" bass line? It be illin' like Run DMC whose pairing of "Son of Byford/Proud to be Black" ends side A of their seminal Raising Hell.

The next song has Biz Markie Goin Off (as per his LP title) as he brings the hip-hop faithful back to the pleasures of Markie's moves for "Return of the Biz Dance". Meanwhile, EPMD have no time to dance as they're too busy fending off the hateration of peers and enemies for their "It Wasn't Me, It Was the Fame" from Unfinished Business. It wasn't Boogie Down Productions either - it was the corrupt cops that KRS-One talks about on "Illegal Business" (from By All Means Necessary).

I still remember going to see Cypress Hill for the first time - they were in S.F., opening for 3rd Bass. How things have changed with Cypress one of the biggest rap acts of the entire '90s. Back around the time of their self-titled debut album though, they weren't too big to threaten to put a "Hole In the Head" of fools trying to test. Maybe that's what Queen Latifah meant by "The Evil That Men Do", a KRS-produced joint off her debut All Hail the Queen. Latifah's come a long way, Oscar-nominated and all that but let's not forget that she's been one of the fiercest MCs in this game. Just as fierce is Gang Starr's "Take a Rest", one of the many instant classics minted on Step In the Arena.

The next two songs are two of my all-time favorite album openers - a crucial position for any track to take. Every artist think's they start with a banger, but few actually deliver the goods. Case in point: De La Soul's "Oodles of O's" from De La Soul Is Dead and A Tribe Called Quest's "Excursions" which kicks off Low End Theory. You couldn't ask for two more engaging and exciting starters.

Pete Rock and CL Smooth's "Mecca and the Soul Brother", from the album of the same name, was a bit of a flub on my part. I thought the so-called "remix" on the vinyl LP versions of the album was unique but actually, it's the same mix that came out on both the All Souled Out EP as well as a limited-edition Elektra promo 12". Oops. Dope song though. So is the wicked "Machine Gun Funk" by Biggie, taken from Ready to Die. Easy Mo Bee produced that infamously bad Miles Davis' album (the one Davis released right before he passed) but he makes up for it with the production on Biggie's opus. Going back a second to the subject of great opening songs, you can't do much better than Main Source's "Snake Eyez" which began Breaking Atoms. I get amped every single time I hear it.

Traveling back out West, I had to give a nod to Ice Cube with "A Bird In the Hand". This song from Death Certificate reuses an old St. Ides commercial beat and turns it into a scathing indictment of Republican economic and political ideology. Sure beats hawking 40 oz's. Dr. Dre's "Stranded On Death Row" is similarly informed by post-Rebellion Los Angeles life as Rage and Snoop Dogg throw down for the cause on one of the illest joints off of The Chronic. And now that I got everyone's motor buzzing, I had to drop Wu-Tang Clan's "Bring the Ruckus" into the mix and get things really gully. Everything about that song is so %(# dirty and grimy, ya gotta love it. Another solid opening song, this time from Enter the 36 Chambers. The South didn't get as much shine on this CD as it probably deserved but I'd be remiss if I didn't include something from Scarface and his first solo album, Mr. Scarface Is Back. "Murder By Reason of Insanity" is some bad-ass Houston gangsterism - it's nice to know 'Face is still around to put it down. But sometimes, you just need to clear the air and start over. Hence: Freestyle Fellowship's "Sunshine Men" from their debut To Whom It May Concern. Despite the happy connotations of the title, the song is actually a vicious lashing out at gangsta rappers and wanna-be East Coasters trying to kick it out West. Aceyalone's killing 'em all softly with his song. Things really do get cheery with the buddah-blessed vibes of Del's "Sunny Meadowz", a track from his debut I Wish My Brother George Was Here. That's some East Bay goodness for you right there. Dipping back to LA, Pharcyde brings us "4 Better Or 4 Worse", a song about the trials and tribulations of relationships...to your microphone. *Nerd alert: technically, this wasn't an album-only cut since Delicious Vinyl did release the song on 12" but in my defense 1) I forgot until after the fact and 2) the single was promo-only. Or maybe you really could have cared less...

It's hard to say that anyone really sleeps on Illmatic, but I always felt like Nas' "Memory Lane" gets passed over as one of the album's best cuts (but heck, look at the competition). It makes my list though as one of the best album songs out there. Likewise, Nas' rival Jay-Z teams up with former mentor Jaz on the forceful "Bring it On" from Jay's unquestionably excellent Reasonable Doubt. For real - it's not about whether Nas or Jay-Z is better - they're both great, cop both these albums.

This next inclusion is the longest song on the whole CD and it's worth every minute. Taken from the first Return of the DJ compilation, Peanut Butter Wolf's "Chronicles (I Will Always Love H.E.R.) does in four minutes what this whole hour-long CD tries to do: encapsulate a history of hip-hop's greatest moments. Plus, DJs need to get just a 'lil shine up in here. To close though, I went with the nostalgia-invoking beauty of OutKast's "Growing Old", one of the many great songs in their career, this one, in particular, taken from ATLiens.

That's it folks - hope you enjoyed the CD and more importantly enjoyed the book. If, for some derelict reason you still haven't gotten the book yet, cop that sucker!. Thanks for your support.

P.S. I'm not playing...buy my book if you haven't already.